The Universe freely delivers ideas through our spirit. It’s left for our mind to master how to invoke it. There are steps to it. And when we attempt right, it comes off as insights, ideas and concepts. All of these in their natural states for manifestation are conceptual. The same goes for goals and dreams.

Ideas, dreams and goals are somewhat over rated.  At any given point, it’s never one person per idea or dream. While we attribute the first sets of touch screen key pads to the likes of Apple with the iTouch and iPhone, it may interest you to note that Casio had a touch screen watch from way back in 1984 (same year as the original Mac) where you would draw numbers on the screen using your finger to write a 1 or 3 or plus or minus. Biblically, even more than one person saw the dream and vision of the birth of Jesus Christ talk less of the birth of that your small idea that you have been hiding.  Dreaming is not a fruit of the spirit, it’s a gift of the spirit. Free gift !
There are different categories of ideas and I hope knowing the categories can help you discover the right one out of the types. They are : 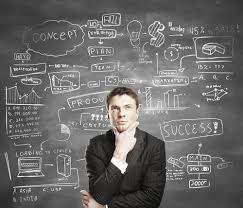 I remember Mo Abudu a few years ago saying to us during my Moments with Mo shoot that it’s better to own 10% of something that makes sense than 100% of nonsense! She followed that principle and today owns Ebony Life TV. It’s better for it to be stolen or collaborated on than  for it not to see the light of the day because you hid it. The heaven in us through the spirit manifests mainly as ideas, insights & concepts. Better yet, dreams.
Also, it’s safe to state that universe freely gives ideas and dreams  in abundance so it’s not just you, anyone  can have them. Execution is the main thing. And in execution seek team work. Just like Isaac Newton said, “If I have seen further it is only by standing on the shoulders of giants”. Find shoulders, ask questions and keep an open mind.
After you have an idea, do a Feasibility and environments scanning of it; if it passes the test, then set a goal, set right the #StrategyAndStructure for achieving it. And then ruthlessly execute and follow through. In that order, it’s really that simple.
The world is waiting on you for that next big idea. But true leadership begins with us leading our innate selves to purpose till it positively affects others. It pays, I can practically say that.
Remember, a  leader is one who knows the way, goes the way, and shows the way.
Eizu, ©Hexavia!
Strategy. Business StartUps and Corporate Restructuring. Projects. Training. Con

Hexavin Laws of Business (Law 17) Law of Excellence and Growth.