Who Moved My Cheese according to the Daily Telegraph is one of the most successful books ever written. It’s by Spencer Johnson.

To be honest, I hadn’t read it till 3 weekends ago when I was invited to Port Harcourt to speak in a room of over 300 lawyers on the topic Who Moved My Fees at The Hotel Presidential. At that point I knew I could learn something powerful from Who Moved My Cheese in relation to people’s fees.

The Book Who Moved My Cheese is a story, parable and metaphors of mice, people and cheese all in a maze. 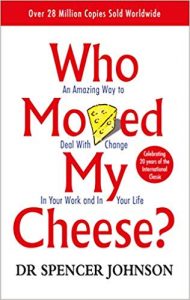 Four beings live in that maze: Sniff and Scurry are mice—non-analytical and non-judgmental, they just want cheese and are willing to do whatever it takes to get it. Hem and Haw are “little people,” mouse-size humans who have an entirely different relationship with cheese. It’s not just sustenance to them; it’s their self-image. Their lives and belief systems are built around the cheese they’ve found. Most of us reading the story will see the cheese as something related to our livelihoods–our jobs, relationships, our career paths, the industries we work in–although it can stand for anything, from health to government.

This book which can easily be mistaken for a fiction of four characters who live in a maze: the mice Scurry and Sniff, and two ‘little people’, Hem and Haw. It starts off with everything going well. This is because they all have found a huge source of their favourite food, cheese. The little men Hem and Haw have even moved their houses to be near it and it has becomes the center of their lives. But they do not notice that it is getting smaller, and are devastated when they arrive at the site one morning and find the cheese is gone.

This is where the story splits in two. The mixes on the other mice Scurry and Sniff quickly accept the loss of the cheese and go off into the maze in search of other sources. The little people, because they have built their lives around the big cheese, feel they are the victim of some kind of fraud or theft. Yet this only makes things worse, as their clinging on ensures that they go hungry. Meanwhile, the mice move on and find new cheese.

The fable captures well that moment after we have lost a job or a relationship and we believe it is the end of the world. All the good things were in the previous situation, and all the future holds is fear. Yet Johnson’s message is, instead of seeing change as the end of something, we must learn to see it as a beginning. We have all been told this, but sometimes motivation is lacking. To make himself accept reality, Haw writes this on the wall of the maze: “If you do not change, you can become extinct.”

For life not to be wasted, it demands a level of risk and adventure. If you are willing to live this way, change loses its horror. In fact, the advancing person purposely creates change because the world is not currently how they would like it. What the Little men, Hem and Haw, discover is that breaking through your fears makes you free. Those who continually seek security, ironically, are wracked by the possibility that they may lose it.

The point of the story is that we have to be alert to changes in the cheese, and be prepared to go running off in search of new sources of cheese when the cheese we have runs out.

Key points : The quicker you let go of old cheese, the sooner you’d find new cheese. I know fear of the unknown can be a challenge. However, the fear you let build up in your mind is worse than the situation that actually exists.

Also, we should learn to embrace difficulty, especially that of change. Difficulty sure has its role in growth. At least it supplies the pressure that gets us off our comfort zone. Trust the process, it always leads to a good place. Difficult roads they say leads to beautiful places. There is a joy that follows after we conquer our fears and difficulties, let that result inspire you to pass through the process . In Physics, it’s pressure that creates excitement for an electron to jump to the next level of its orbit, which produces light, your quantum leap.

An emotional part of the book is when Haw looks to Hem and says “Sometimes, Hem, things change and they are never the same again. This looks like one of those times. That’s life! Life moves on. And so should we”. Like points of exploration, you should too!

Thank you for the review.
This book always remind me of change and the need to move when it happens