An economic research inspired by the BCG (Boston Consulting Group of the 1960s). It invented the Market Growth/Market Share quadrants ( those with MBA’s or those that have attended the HexavianMasterclass of recent will be able to remember). The big question is “Is there really a trend to competition and market share distribution in most industries_?” 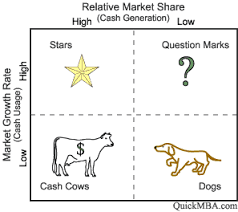 Just as living organisms have a reasonably standard pattern of growth and development, so do competitive markets (oligopoly and beyond).
BCG once researched into approximately 200 industries and the result revealed that markets evolve in a highly predictable fashion, governed by the Rule of Three.
The 123 Rule basically breaks down the market into 3 main competitor types.
There are always three major competitors in any free market within any one industry. Knowing your position in the market (alongside your product life cycle and the BCG Market Share (x axis) – Market Growth (y-axis) quadrant should determine your strategy.
By market share, we can divide the categories of companies into the following
Just like GTBank (let’s call it the number 1 firm), in market positioning, is twice the size of the 2nd place (most likely Firstbank/Zenith), General Motors in America has almost twice the size of Chrysler and MTN has almost twice the size as Glo (the industry 2nd), in most industries, there are trends. The number one which refers to market leader (they are like the title defenders), an example will be GTBank and MTN;  the number 2 brand (the challengers, maybe Firstbank and Globacom) and the thirds (usually a large number of firms can be in this category at the same time, let’s call it “the rest of them”

). The thirds  can be referred to as “the rest of them”. They are  ever just trying to just make profit without a lot of immediate aspiration to go head to head or attempt to beat the number 1 and 2s (UnityBank and Smile 4G). Usually even if the entire market was given to them, they’d fail for lack of production and management capacity. Most of us are probably here.
The number 1 usually has twice the market share of the number 2’s and three times that of the rest of any of the rest in the third category.  The number 1 company is usually the least innovative, though it may ironically have the largest R&D budget.
The number one is usually big, enjoying macroeconomic incentives and economy of scale but it is usually very slow to change. And number 3 usually produces the most innovations which is most times stolen by the number 1 . While number 1 and number 2 battles it out through head to head collisions with the two playing defensive and offensive market strategy respectively; the Number 3 guys are advised to concentrate on a Niche market. Guerrilla Marketing is recommended for the number 3.
Business is like a game of football. It is uninteresting and almost meaningless without an opposing team. Also just like football, if the team simply identifies the goal line and moves the ball towards it without regard to the competing team, they most likely will be blocked in their effort. To win the game, the team must focus its efforts on outwitting, outflanking, or over-powering the other side.

The Dynamics of Market Positioning 2

An Ambivert State of Mind

How They Started (Linda Ikeji Blog)