Passion, Experience and Opportunity are the only 3 places you can look at when starting out a business. Passion is usually the best . But passion has an expiry date.

Realistically speaking, If you’re young, then it’s the right time to talk passion, else you’d grow up talking survival. It’s called getting a J.O.B, Just Over Broke.  Listen dear, you’ve got to love or be good at something at least. Find it early, that one thing you love and can do better than most people. And then have the discipline to master it

It’s what it took David to knockout Golliath. David wasn’t big, but he had speed and accuracy with the stone. Its the art of making disadvantage an advantage. 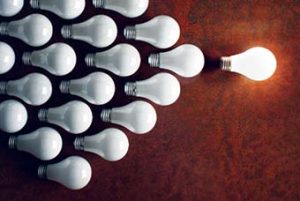 Be good at something.

Compensation learning are the things you find yourself being good at to compensate for the other things you’re not good at due to the lack of opportunity to learn them.

Cosmas Maduka’s parents couldn’t afford school, so he went into apprenticeship. And out-learned everyone else about cars and selling. Today he owns Coscharis.

It’s like the dyslexic guy in your class who always failed his tests. But to fit in, he made up by becoming funny. Today he is a successful comedian.

It’s like Stevie Wonder, learning to play the piano more than everyone else because it’s one of the few things he didn’t need sight for.

Compensation Learning is what it took Jay-Z to create good music, even though he never writes. He just freestyles from his head. But he had no choice, because growing up, he was always on the streets selling drugs, and those guys keep guns, not a pen and pad for writing rap. So he had to learn to memorize thousands of rhymes and verses till when he had time to make it to the studio.

Listen,
“It’s not what you don’t have that stops you. It’s what you have but don’t know how to use”

I hope you’ve referred someone for our masterclass for this month. It’s the best thing to start the year with.

Do You Know What Time It Is. What Have You Achieved Already?

Are You in Church or is the Church in You? #HexavianSundaySeries

I Pushed and the Door Remained Closed

5 Hacks I Used in Making My Life an Adventure