In today’s market place,  so many people are trying to win by being cheaper, that’s too cheap to build sustainable and progressive wealth. So in a price war between producers, the only real winner is the consumer.

Someone asked me what the concept of my highly successful book #ChurchForTheStreet is, and I said to reach the millions of Christian who don’t go to church. That’s a huge market and black economy that tithe seeking pastors neglect. Like I always say, if I was to be a pastor ( which I am so uninterested in), my church won’t be for Sundays, it will have disco lights, not choirs but DJs and will be open mainly on Friday evenings (too many good Christians have nowhere fun to be, or to go on that day with too many churches, saying same thing and trying to win the same members on Sundays).

If I were to be a Fulani man selling Suya, I’ll be open mainly in the morning and afternoon, we rarely can find Suya then (and Suya goes well with drinking Garri by the way). People need to just think more out of the box. Working with Ruff N Tumble a few years ago on an expansion plan, I saw what Niche Focusing practically can be (with what @adenikeogunlesi has done by just concentrating on just children’s fashion). 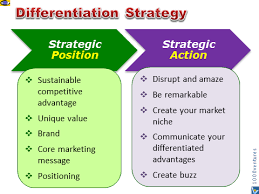 Differentiation and Niche Focusing is more powerful than price wars in beating competition. Zooming into both, take for example, approximately two million women get pregnant in Nigeria every year. Imagine if you’re a fashion company that concentrates only on that niche and then you begin to build a brand as the main clothing line for pregnant women. That’s Differentiation and Niche Focusing at play. That’s a huge niche there. Even with only 1% market penetration and an average annual spend of N20,000 per customer, that’s about N400m turnover and with a high margin of safety and profit margin of 20 to 30%, that SME is in for a annual EAITA of over N20m. That’s with ease and comfort from home.

We need to begin to think not just out of the box, but like there is no box. Inbox me to unbox your self.

Are We Over-selling Faith and Luck?

How To Wake Up Every Morning